Coming to the Midwest by way of Southern California, Scott has been living and working in Chicago since graduating from Northwestern University…many years ago. After receiving a degree in Theatre, Scott pursued a career in acting and arts administration. Although he has left the stage behind, Scott continues to bring diverse artistic programming to the community. In addition to schoolwork, Scott serves as Managing Director for Red Theater, a storefront non-profit operating in Chicago. Scott is also a member of the Public Interest Law Group and spent his 1L summer interning for Illinois Legal Aid Online. If you want to get to know Scott, just ask to see pictures of his dog and cat – they’re seriously best friends and he has evidence to prove it.

Another double purple, Cherie earned her B.S. in Social Policy and Economics at Northwestern. While in college, she did due diligence for her legal career by spending time at a civil rights law firm, a pro bono legal clinic, an international arbitration commission, and the Cook County State’s Attorney’s Office. This past summer, she interned at the General Counsel Office of the Illinois Human Rights Commission. Cherie is originally from Suzhou, China, and attended high school in Hong Kong. She also found her love for Tarot Reading in Vienna – find her if you want your fortune told.

Isabella Spinelli is a 2L at Northwestern.  She grew up in the Chicago suburbs and attended Northwestern for her undergrad degree as well, and studied musicology and music composition.  In her free time, Isabella enjoys reading, staying active, listening to podcasts, cooking, and thrifting—sometimes simultaneously.

Holly was born in China and moved to the States to attend high school and college. She is a proud double purple. Prior to law school, she worked as a multimedia journalist for three years in Atlanta, Austin, and Chicago, covering state politics as well as international relations. This past summer, she was a summer associate at King & Spalding doing litigation and white collar work. Outside of school, you can find her listening to podcasts, exploring new boba places and book shops in Chicago, and bar hopping with her friends.

Tori is from San Mateo, California and attended the University of California, Irvine where she received a B.A. in Economics. This past summer, Tori was a Legal Intern at the Chicago Park District. At Northwestern Law, Tori is a member of the Journal of Law and Social Policy and California Connection. In her free time, Tori enjoys walks along Lake Michigan and exploring Chicago through architecture tours.

Born and raised in the Bay Area, California, Katherine still finds the Chicago snow a novelty. She went to UC Berkeley, where she has a B.S. in Environmental Economics and Policy and B.A. in Political Economy and where she served as Senior Class President. In her undergrad years, she studied abroad in Taipei and Shanghai. Before law school, she worked in insurance. During her free time, she enjoys playing tennis before the snow comes, skiing outside of Illinois, reading, west coast swing dancing, trying out new foods, and yoga. She is fluent in Mandarin Chinese and proficient in Shanghainese. At NLaw, she is a part of the Journal of Technology and Intellectual Property, the High Tech Law Society, Environmental Law Society, and California Connection.

Amanda graduated from Georgia Tech with a degree in Materials Science & Engineering. Prior to law school, she was an engineer at P&G’s Charmin, Bounty, and Always plants. This summer she was a judicial extern in the Northern District Court of Illinois and an intern at Davis Wright Tremaine in Seattle. In her spare time, she loves getting boba, shopping, and playing keyboard for SKULLIA.

Born and raised in sunny Los Angeles, Justin Auh earned his B.A. in business economics from UCLA, where he was a sports journalist for the Daily Bruin. He tutored student-athletes prior to law school and was a summer law clerk at Gordon & Rees this past summer, assisting with commercial litigation matters. Justin is also the VP of Southern California for Northwestern Law’s CaliConn organization and a member of the Northwestern Journal of International Law and Business. In his free time, Justin enjoys playing and watching basketball, hiking, and exploring Chicago’s food scene.

Laura was born in Seoul, South Korea, and grew up in West Vancouver, Canada. She earned her B.A. in Business Administration at Korea University.  Prior to law school, she worked as a paralegal at Kim & Chang, a big law firm in Korea. This past summer, she worked as a legal intern at Mondelez International in Fulton Market where she ate one too many Oreos. She is also a member of Diversity Coalition. In her spare time, she loves trying out new restaurants in Chicago with her friends and stocking up her fridge with Trader Joes’ seasonal items.

John-Paul spent five years of his childhood in Hawai’i and the rest in Chicago. Before Northwestern Law, he was a pianist and music educator having received his Bachelor’s and Master’s degrees in piano performance from DePaul University. John-Paul is a co-President of Northwestern’s Intellectual Property Law Society and spent his summer at Siemens Industry, Inc. working with their in-house legal department. In his spare time, John-Paul enjoys listening to (read: obsessing over) classical music, running, watching movies, baking/cooking, and comparing red wines.

Born and raised in Kunming, China, Holly spent 7 years living in Illinois and actually enjoy the weather here. She graduated from the University of Illinois at Urbana-Champaign with a double major in Accounting and Finance, where she also served as a site coordinator at Volunteer Income Tax Assistance and a senior consultant at Illinois Business Consulting. This past summer, she interned at the Law Office of the Cook County Public Defender. Outside of law school, Holly is a huge fan of live music and loves going to concerts. Her favorite albums of 2020 (so far) are Dawn FM, Palaces, and CAPRISONGS. 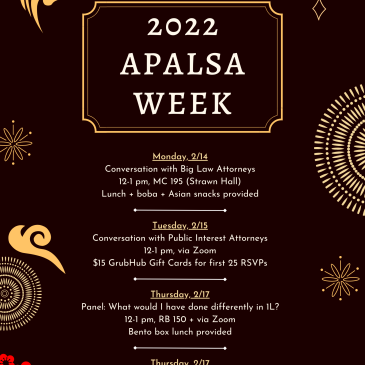 Click to see the schedule of events & more! … END_OF_DOCUMENT_TOKEN_TO_BE_REPLACED

Click to see the schedule of events & more! … END_OF_DOCUMENT_TOKEN_TO_BE_REPLACED 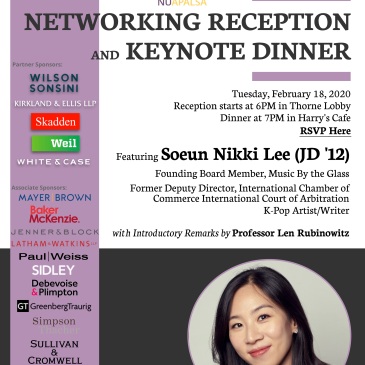